What does it mean to fit in? We spend all of high school obsessing over it (or pretending not to obsess over it), all in the name of trying to find a community we belong to. But it also goes far beyond high school and affects us way into adulthood. So much of our lives are consumed with just trying to find a place where we feel like we’re comfortable, happy, and safe—and this sense of community looks different to everyone.

We wanted to take a closer look at what it means to fit in and how we feel when we find a community to engage with, which is why we surveyed 2,000 people to better understand how a sense of community affects us from high school through adulthood. Here’s what our survey had to say. 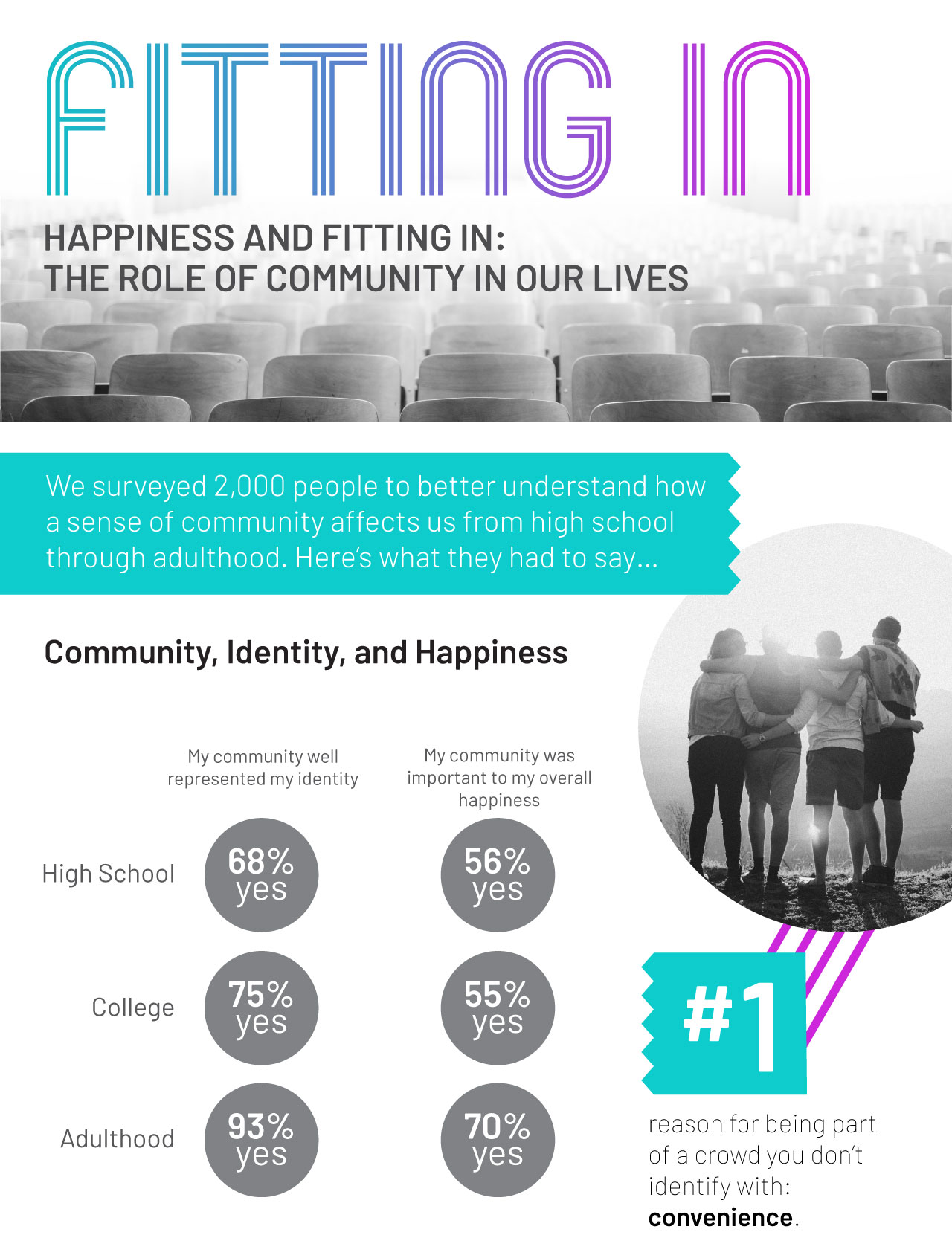 What does it mean to be happy? Does the community surrounding you affect your overall happiness—or is it the other way around?

In our survey, which asked respondents to examine their situations from high school to college to adulthood, we asked what they thought about the link between communities and happiness and whether or not they thought their individual communities represented them well.

But what about those who didn’t feel like their communities represented them well? Why were they even a part of that group to begin with? The number one answer we received on why individuals were part of a group they didn’t identify with was convenience. 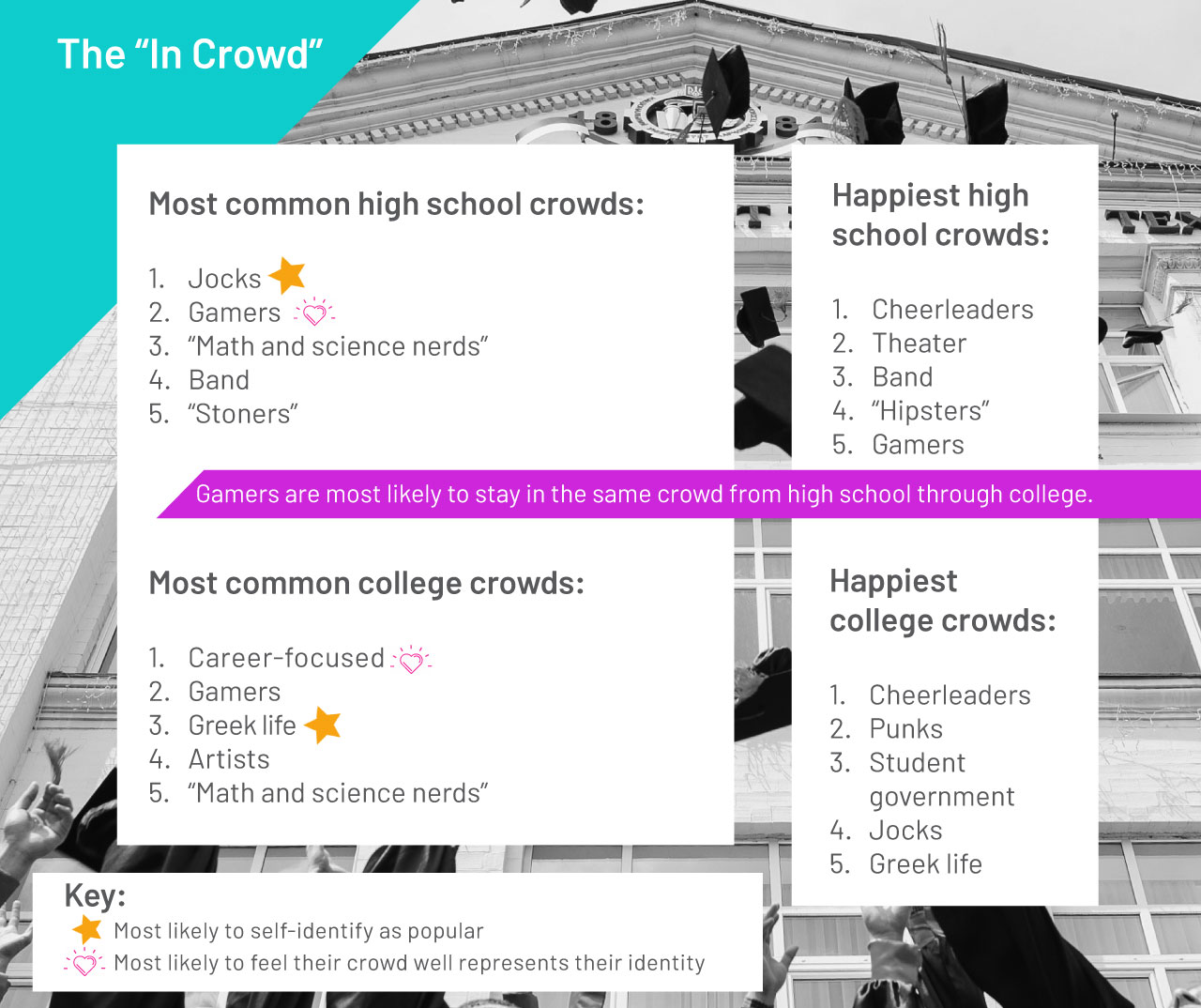 For some of us, much of high school—and let’s face it, a lot of adulthood—is burdened by worrying about trying to fit in with those who are coolest. Whether you call them “the cool kids” “the popular kids” or the “in crowd,” these people ruled the school and weren’t afraid to let you know.

We wanted to explore these “in crowds” as well as a few outliers to get a sense of their happiness levels through high school and college.

The most common high school crowds we identified on our survey were jocks, gamers, “math and science nerds,” those who were in band, and the ubiquitous “stoners.”

Of these groups, the jocks were the most likely to self-identify as popular, but it was the gamers who were most likely to feel like their crowd represented their identity well.

But out of all the crowds during high school, who were the happiest? We found that the happiest groups are the cheerleaders, followed by theater kids, band members, “hipsters,” and gamers.

The most common college crowds were those who are career-focused, gamers, those who participate in Greek Life, artists, and the “math and science nerds.” Of these groups, those who participated in Greek Life were most likely to self-identify as popular, but out of all these college cliques, it was the career-focused who were most likely to feel as they though had found their “tribe” and felt as though their crowd represented their identity.

So, who were the happiest groups in college? Again, the cheerleaders took the top spot, followed by punks, student government members, jocks, and finally, those in Greek Life.

Finding Your Community as an Adult

When you’re in school, it’s easy to make friends—if only because people of your own age group surround you all day, every day. But what about when you grow up? How do you find a community or a group of friends? Interestingly we found that only 15 percent of adults end up in the same crowd they were in during high school and college, which isn’t altogether unsurprising as people move, get new jobs, and become part of new communities.

The most common adult communities are those people with common interests, coworkers, neighbors, those who are in sports leagues together, and colleagues within the same industry. The happiest of these adult crowds were those groups who had common interests (such as arts/culture), followed by neighbors, those involved in sports leagues together, coworkers, and finally, those who are colleagues within the same industry.

But are these online communities making us happy—or are they contributing to even more loneliness? Our survey indicated that adults who turn to the internet to find community are happier than those who don’t.

How We Fit In

Whether we want to admit it or not, we’ve all done things or pretended to like things in order to fit in. We asked 2,000 Americans about the essential things they and their peers did to fit in during high school. Here are the brands they said were in with the “in crowd.”

If you went to high school in the ‘80s, it probably seemed like everyone, including the cool kids, was up-to-date on the latest episodes of “90210”—and for the most part they were: 92 percent of our survey said they watched the show and 8 percent said they didn’t have a television at that time. Just like the kids in the ‘70s, those who grew up in the ‘80s just had to have Levi’s, Nike shoes, and Ray-Bans, which a good percentage owned with some admitting that they bought them even though they didn’t want them. As far as games went, it was all about the Atari, which 73 percent said they owned and 27 percent said they couldn’t afford. Other must-haves for the ‘80s were Guess brand clothing, Chevy cars, Coach accessories, and Swatches.

For those who grew up in the early 2000s, you might have heard phrases down the hallway from the MTV reality show, “Jersey Shore,” which 28 percent of our survey admitted to watching, but a staggering 67 percent said they didn’t want to watch it. And if you grew up in the early 2000s, it’s likely you would have seen the cool kids wearing Abercrombie and Fitch and carrying Coach or Tiffany & Co accessories. For entertainment, millennials often turned to the popular game “Call of Duty,” which 62 percent of our survey said they owned (and only 32 percent said they didn’t want to play) or their Apple electronics, which 45 percent said they owned.

THE ADOLESCENT BRAIN, OR… “WHAT WAS SHE THINKING!?”